In January 1921, La Route d'émeraude by Auguste De Boeck (1865-1937) premiered at the Grand Théâtre in Ghent. The libretto was written by Max Hautier, who based it on the novel of the same name by the French-speaking Belgian Eugène Demolder. La Route would be the last opera De Boeck wrote.

The piece is set in 17th century Netherlands and was an immediate success, both at the premiere in Ghent and later in the year in the (French-language) Théâtre Royal in Antwerp. This was followed in 1926 by a performance in the Théâtre Royal de la Monnaie in Brussels. When August L. Baeyens makes a Dutch translation of La Route d'émeraude, the opera will finally be performed in 1933 by the Royal Flemish Opera in Antwerp under the name Francesca. Francesca is the woman to whom protagonist Kobus vainly loses his heart.

Even before the First World War, Max Hautier had begun working on the libretto of La Route d'émeraude, which he wrote especially for De Boeck. However, the passionate collaboration between the two men came to an abrupt end when Hautier was called to arms. Hautier gave the unfinished libretto to De Boeck, who enthusiastically continued to set the opera to music. After the war Hautier revised a large part of the libretto and De Boeck had to write new music for many fragments.

The complete score of La Route d'émeraude is present in the BOO collection and consists of four voluminous books in the composer's beautiful handwriting. La Route d'émeraude is described on the cover as a Comédie Lyrique en 4 Actes et 5 Tableaux. De Boeck dates his work as accurately as possible: thus, we know that the first part was completed on 28 Septembre 1920. 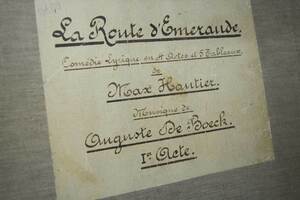 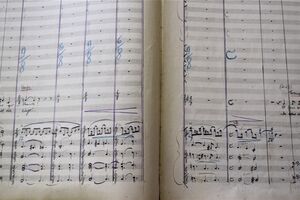 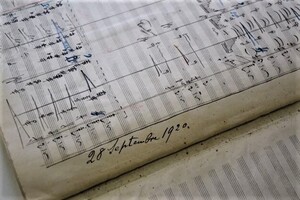